I spent the weekend in Melbourne with my beautiful girlfriend, knowing me all too well, she organised for us to go to Melbourne Museum to see the a special exhibition on: The Wonders of Ancient Mesopotamia

This exhibition is a perfect example of why you should get out to a museum at least a couple time as year –  you’re bound to learn something new and fascinating, which will get you to see and think about the world a bit differently.

It’s also great idea for a date, but more on that later.

Mesopotamia – the cradle of civilisation

So where was Mesopotamia? literally meaning the ‘Land between the Rivers’, it was a region between the Tigris and Euphrates rivers, which includes modern Iraq, north east Syria and south east Turkey. 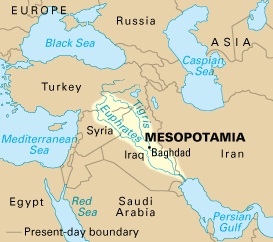 Why is Mesopotamia important?

Let’s think about each for a second.

The birthplace of modern agriculture

In a modern sense, human’s become ‘civilised’ when they mastered agriculture – that is when a community can stay in the one place and grow crops throughout the year and live comfortably – this marks the point in the evolution of societies from being nomadic tribes, roaming the lands and hunting and gathering for a living, to staying put in one place. 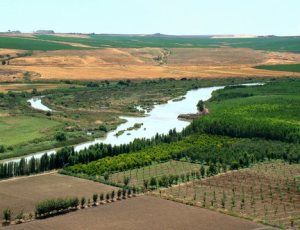 The key to agriculture is of course water, or rather, irrigation. Being able to control the level of water and maintain an adequate water supply throughtout the year, ensures consistent and good crops. Without it, the land is exposed to the extremes of the seasons – flooding, droughts, etc. The earliest society in Mesopotamia dates to about 5300 BC and it’s estimated that they mastered irrigation and therefore agriculture around 3500 BC, just imagine that … 2000 years to master agriculture!

Before we move on, let’s think about those dates  … 5300BC …. 3500BC, that pre-dates the Ancient Egypt you learnt about as a kid, which really kicked off from around 3150 BC to around the 30-50 BC (at which point Egypt became a province in the Roman Empire (but that another story and involves the sexy Cleopatra)).

So Mesopotamia is old, older than the Ancient Egypt of King Tutankhamen and the great pharaohs!

The birthplace of writing

I mentioned that writing was invented in Mesopotamia, but how so?

Well I’m sure you can remember seeing cave painting and stone carvings of ancient peoples that are dated far back in history. However, this is not what we’re talking about when we talk about ‘writing’. I mean writing in a modern sense, something written down that is portable, a ‘sheet of writing’. This is what the peoples in Mesopotamia invented around 3100 BC. It took the form of etching/writing on small clay tablets that fit in your palm.

They used this medium for everything from documenting important stories to use in ‘school’s where the teacher would teach students using these clay tablets, think of it like your school workbook where you did your homework!

Well, our language continues in the form that the Mesopotamian’s invented! They invented writing and wrote from left to write, then top to bottom.

Thr birthplace of the large city-state.

Finally, I mentioned the Mesopotamian’s gave rise to the city-state.

Whilst today we see nations/countries as the predominant organisational form of society, it all started with city or city-state. Which is effectively a larger permanent settlement of people, organised by a sort of authority, bureaucracy or government. For example, ancient Athens was a city-state, so was Rome, so was England in its early days, as was Berlin in the modern era. It was from these city-states that modern civilisation developed, evolved and then expanded into empires. The first cities (in a modern sense) originated in Mesopotamia, Erbil in Iraq is one such example, an area first inhabited around 8000 BC but developed into a city around 2000 BC.

It is no coincidence that the creation of the city-state follows from the development of modern agricultural techniques. When a community can stay put in one place for a long time became it can support itself through farming and doesn’t need to keep travelling, you can see how such a community would grow in size and evolve the structures we associated with a city.

Which brings me back to the title of this post – Why Museums are Cool.

Firstly, because you’re bound to learn something new and fascinating, something which will hopefully get you to see and think about the world a bit differently. The Mesopotamian’s gave us revolutionary technologies (irrigation for agriculture, and writing) and gave birth to a new social-political form of organising society: the city-state. Just imagine what new technological inventions and ideas will shape the future 2000 years from now?

Secondly, museums are cool because they do all this is an interactive and engaging way. You can walk around an exhibit for an hour, look at things that catch your attention and move on from those that don’t – read a few posters on the wall, watch a short video – look at ancient artefacts first hand, and also just have the time to stand there and take it all in, in your own time.

So this is why museums are cool …  an hour spent on effortless learning, which will hopefully change the way you see and think about the world.

A final point, they’re not a bad place to take a girl on a date, not the first date, but sometime down the track.

Visit a special exhibition, something that will take no longer than an hour. You’ll get credit for being different, you’ll come across as sort of interesting and not boring – someone with worldly interests. You could add a conversation about travelling, and how cool it would be to go travel to these places – she’s think you’re adventurous. And, memorise one or two interesting facts about the exhibition before you go and drop them into conversation casually, she’ll think you’re smart. But no more than a couple of facts, no one likes a show-off.

(I took my girlfriend to the Tutankhamen exhibition at Melbourne Museum over a year ago, and by all accounts, she was impressed and enjoyed doing something different together)

I read the following article in the Sydney Morning Herald about a two brothers that bought a terrace on Cleveland Street in Chippendale (suburb next to Redfern on the edge of the Sydney CBD). They completely renovated the property and recently sold it for $940,000, which was $5,000 below the record for that suburb. They had paid $675,000 for that property in late 2010.

However, my concern is that this just propagates the idea that property is a great investment and in particular that one can make money by buying old/rundown properties, renovate them and sell at a profit. I believe the headline figures and the general discussion of the article reflect this.

Now, 7% might not be huge but it may still seem like a good return to you. And note, that this is all the information that the article gives you.

But, then i began to think about all the other costs associates with a property:

So i began to investigate these and tried to estimate each. Now I’ve had to make a few assumptions, in particular about financing, but I believe these are fairly standard.

In addition, I’ll assume that the brothers have financed the renovations with their own money (i.e. equity funded). Whilst this is a big assumption, it means that my estimates are conservative

I used the RBA’s inflation calculator to provide a general estimate (www.rba.gov.au/calculator/annualDecimal.html). (Calculated quarterly from Sep-2010 to the Mar-2012 quarter)

Including these costs in the initial calculation, the total costs incurred by the two Brothers is about:

So the estimated profit is? NIL.

After including stamp duty, financing costs and accounting for general price inflation, the real loss is $62,000.

What was the return on investment?

Ignoring the general inflation value above (which is a non-cash amount), the cash loss at sale was -$37,850.

Which gives a return on investment of -11%.

Anyone can tell you that you should not investment your money in anything that gives you a NEGATIVE return on investment, which means you’re going to loose money!

Also, there are others costs involved in this entire process which are material, but have not been considered. E.g.

So the real cost loss would have been greater than shown above.

The Brothers could have taken the $350,450 they invested in the property, put it into a term deposit or a high-interest e-Saver, and over the 18 months they could have earned around 5.5% interest (with interest compounded monthly)

After paying personal tax, in general, the Brothers could have earned about $21,000 after tax for a return on investment of about 6.0%.

How would you choose to invest your money?